How to Take Down a Pop-Up Gazebo?

Putting up a canopy is fairly easy work, but do you know how to take down a pop-up gazebo?

Even if you weren't the one to put up the gazebo to begin with, you can easily disassemble one by following some simple instructions.

The beauty of today's pop-up gazebos is that they're designed for easy use, so you can have yours down and packed away in only a matter of moments. 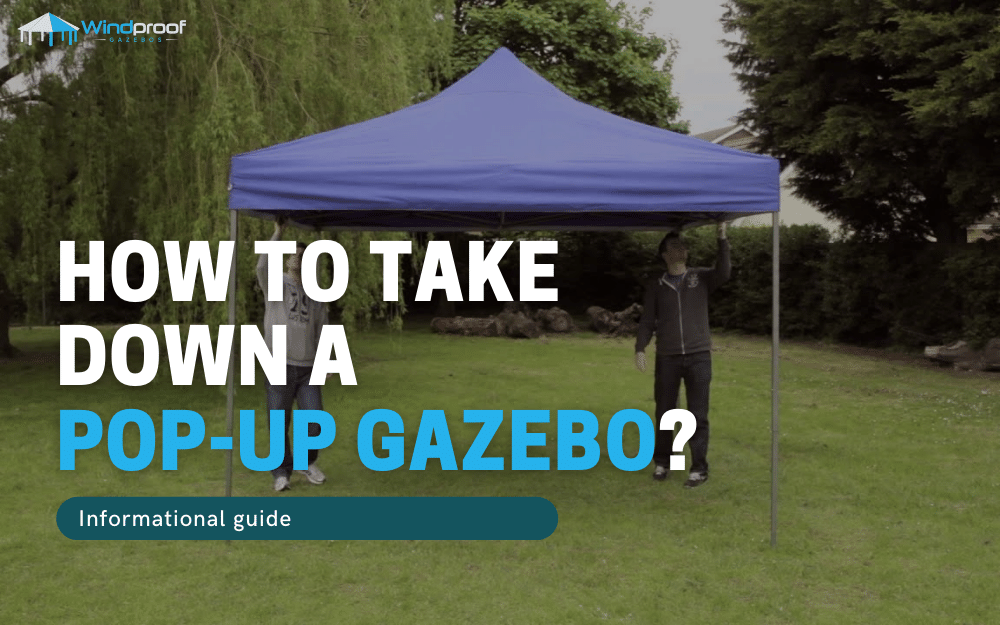 How to Take Down a Pop-Up Gazebo?

Your party or event is over, and now it's time to take down your temporary shelter. Do you know how to take down a pop-up gazebo? Grab a friend and follow the instructions below to have your gazebo packed up in no time.

Remove Curtains, Panels, and Other Accessories

Before you dissemble your gazebo, you'll want to remove all accessories from the frame and immediate area.

If you have outdoor furniture, move it away from where you're working. If the gazebo is equipped with curtains or panels, remove these, fold them, and set them aside.

Remove all string lights, extension cords, and other decor so that all you're left with is the gazebo itself.

Walk the perimeter of the gazebo to locate all of its anchor points. If the gazebo was assembled over soft ground, you'll probably find pegs. If it was installed over a concrete pad, the legs may be attached to a bracket. In some cases, the gazebo may not be anchored to the ground at all. Instead, there may be gazebo weights holding it down.

When all the anchors have been removed, brush or clean them off so that they don't make a mess while in storage, and then set them aside.

Depending on your gazebo model, you may need to remove its legs during disassembly. If you have a gazebo that doesn't require removal of its legs, skip this step.

The process of removing a pop-up gazebo's legs will require at least two people. Don't attempt to complete this process on your own as you may hurt yourself by trying to lift excessive weight or you may accidentally tip over the gazebo.

To get started, make sure that the gazebo has been lowered to its lowest setting. Remove the legs one at a time and set aside. When you're done, the roof of the gazebo will be sitting on the ground.

Depending on your gazebo model, you may need to remove its canopy during disassembly. If you have a gazebo that doesn't require removal of its canopy (either because it's one piece or the manufacturer indicates that you don't have to remove it), skip this step.

To remove the canopy, inspect it to determine how it's attached. In many cases, you'll find that the canopy is attached by clips, rope, or Velcro. Removing these attachments typically just requires a quick pull or press.

Once you've removed the canopy, carefully fold it to prevent damage and make it easier to transport later.

Collapsing the frame of pop-up gazebos is extremely easy. You'll need the help of one other person. Stand opposite of each other and grasp the frame. Lift it, and then slowly start moving towards one another. As you do, you'll notice the frame will collapse at bend points. When you're done, the collapsed frame should be a fraction of the starting size.

That's it — you've taken down your gazebo. All that's left is storing it. Many gazebos come with storage bags or rolling cases. If yours did, pack your gazebo as instructed in its manual.

If your gazebo didn't come with a storage container, you can purchase one separately or use something you may already have in your garage. Depending on the size of your gazebo, a large duffle bag, a plastic storage tote, or even a cardboard box would be suitable storage ideas.

How long does it take to take down a pop-up gazebo?

Depending on your model, it may take as little as 2 minutes to take down your gazebo. This is especially true if it's a smaller, one-piece design that doesn't require removal of the legs or canopy.

If your gazebo is larger or requires that you remove its legs and/or canopy, it may take up to 15 minutes to take it down. The larger your gazebo and the more disassembly it requires, the better an idea it is to enlist a friend to lend a hand.

How hard is it to take down a pop-up gazebo?

It's generally very easy to take down a pop-up gazebo. Because collapsible gazebos don't have many (if any) removable parts, you won't require lots of tools. In most cases, a screwdriver may be the most you need.

How to assemble a pop-up gazebo?

In most cases, assembling a pop-up gazebo is as easy as stretching out the frame, attaching the canopy, attaching the legs, and anchoring it to the ground. Some gazebos feature a one-piece design, which means all you need to do is stretch it out and use its push-button adjustments to extend the legs to the height you desire.

Yes, most pop-up gazebos are perfectly safe. They're usually made out of high-quality materials that won't bend or break during installation or bad weather. When you choose a top brand, you can expect an outdoor structure that can last years. If you plan to leave a pop-up gazebo up for longer than a day, it's a good idea to anchor it to the ground. This will prevent it from blowing away or tipping over.

Video Showing How To Put Up A Gazebo

Our Australian friend, The Camping Guru, shows how to put up a gazebo. This may illustrate to you, the steps required to assemble and disassemble your pop up gazebo.