How to Install Cedar Shingles on a Gazebo?

Wondering how to install cedar shingles on a gazebo?

....You know it will look gorgeous, but is the process hard?

The process isn't particularly difficult, but it does involve several important steps.

As long as you're willing to properly prepare your roof for shingles and follow the tips below, you'll enjoy a beautiful roof that will last for years.

Let's take a quick look. There's a video at the end to help. 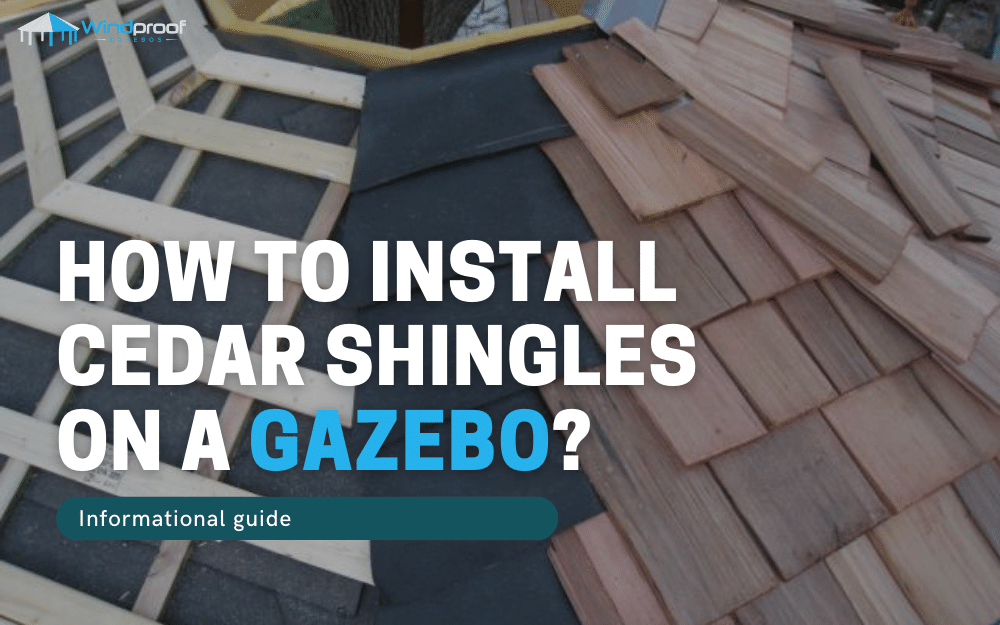 As with many things in life, the more effort you put into installing cedar shingles on a gazebo, the better the outcome. Not only will the roof look amazing, but it will last a long time. While you can skip some of the steps below, you'll enjoy the best results if you follow step by step.

This installation guide starts with the assumption that you've built your gazebo's roof and are now working with a plywood base. While you can install cedar shingles directly to this base, this shortcut rarely pays off. For starters, you may experience leaking from where nails have penetrated the plywood.

To prevent this type of leaking, you'll want to start by installing a self-sealing membrane. This material seals around nails that may penetrate it to prevent water from leaking through to the plywood below.

Also known as a waterproofing membrane, these materials are self-adhesive, so all you have to do is peel and stick. You'll install the self-sealing membrane across the entire roof, all the way to the edge of the plywood.

Another step in directing the flow of water from your roof is the installation of a drip edge. The metal, L-shaped pieces are attached to the edge of your roof line. Once you've installed the drip edge, you'll seal the drop seam by installing another piece of self-sealing membrane.

Cedar shingles are renowned for their classic look and the fact that they naturally repel bugs. However, like all wood, they are susceptible to rotting. This happens because when shingles get wet, they absorb moisture and swell. When they're exposed to sunlight, the top of the shingle will dry out, but the bottom (which doesn't see the sunlight) won't. This moisture retention is what eventually leads to warping and eventually rotting.

Ventilated underlayment comes in rolls. Starting from one side of your roof, roll out the underlayment and cut it with a blade when you get to the other side. Use staples to attach the underlayment to the roof. Space your staples about 24 inches from one another.

Now that your roof is properly prepared, it's time for the main event: installing the cedar shingles.

Before you start nailing, you need to do a little planning with a tape measure.

Take one shingle and place it at the edge of your roof. Position it so that it overhangs the side by ¾ inch and the front edge by 1 ½ inches. When the shingle is in place, use a nail gun or hammer and nails to nail it in place. Use two nails, and position them 6 inches up and about 1 inch from each edge.

The first row of shingles requires a double layer, so find a shingle that isn't as wide as the first shingle and place it on top, positioned all the way to the edge of the first shingle. Nail it like before, about 6 inches up from the bottom and 1 inch in from each edge.

Moving on to the second shingle of the second layer of the first row: Find a shingle that will cover the gap between the two shingles of the first layer. The new shingle should cover the gap with at least 1 inch of material on either side of the gap. Again, make sure that it overhangs in the front to the correct extent, and leave a gap of ⅛ to ¼ inch between it and the shingle next to it.

It's now time to move on to the second row. At this point, you need to determine where you'll position the first shingle of this second row, or to put it in roofing speak, determine how much of the cedar shingle you want to reveal. Standard practice is to reveal 5 inches of the previous row. While you may be tempted to go with a longer reveal (because it means fewer rows = fewer shingles = less work), keep in mind that exposing so much of the shingle will diminish its strength. Installing shingles with a reveal of 6 inches or more makes it more likely for wind to rip the shingle from your roof.

To install with a 5 inch reveal, all you need to do is measure up 5 inches from the bottom edge of the first row of installed shingles. Draw a line with a pencil, and this is where the bottom edge of your next layer of shingles will sit.

Continue the process described above as you go across the roof and up. When you reach the apex of the roof, you can complete your roofing project by capping it with longer boards of cedar.

How to Install Cedar Shakes and Shingles (Video Tutorial)

Our friend Gerry Chicalo uses a specialised hammer to install cedar shakes on his roofing. This will give you an illustration of what will be required for your own project. Hopefully you're a competent DIYer, or perhaps you have a friend who is!

How to Decorate a Gazebo for a Wedding Ceremony?