How to Put Up a Gazebo: Step by Step Guide

Typically made of wood or metallic stands, gazebos can serve a variety of purposes. You can put it up in your outdoor area as a place to sit and relax while enjoying the fresh air and view of the surrounding. It can also be used as a charming shelter during cookouts and special occasions like weddings. 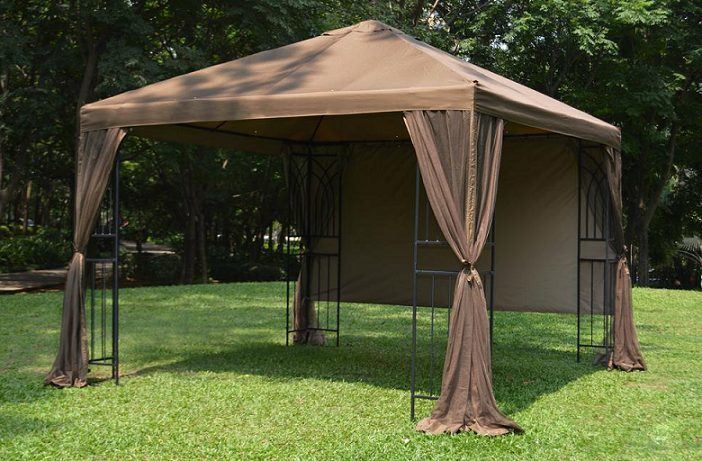 Assembling a gazebo isn’t time-consuming but you will need a helping hand to help you safely complete the task. Before you begin the installation, we recommend that you carry out a risk assessment on whether the gazebo can resist the wind.

Make sure that the pegs can do a good job as it’s important to keep the unit from taking off otherwise it could result in grave damage to the gazebo cover and it may even extend to other property.

How to Put Up a Gazebo: Steps to Follow

To get started, make sure that the location has been levelled, then fit the frames together. Some frames have a canopy which will aid to identify the canopy. Gazebos are usually portable and designed to fit together. Now, let’s get in details to the steps you can follow to set up your purchase.

Before you attempt to set up your gazebo, make sure you have read the material that comes with it. Read up the steps involved and check the items against what is in the material to be certain that everything is complete. It also helps to organize these parts in the order in which they will be used so you can finish the actual set up faster. Alternatively, you can compensate for the uneven ground by adjusting the height of each of the legs.

For your gazebo to be firm in the ground, you need to level the area you want to use. You can do that yourself with the help of a shovel – just move dirt from the high spots to the lower areas. This will prevent incidences of trips and falls as well as give the gazebo a better chance at standing in a storm.

The next step is to install the canopy. Some Gazebos have the canopy attached to the frame at the factory while some may have more than one piece that are put into place after the frame has been erected. If yours is the latter instance, unfold the canopy and spread it out in direct sunlight so it can become more flexible.

Once you confirm that it’s now pliable, you will require the assistance of another person to pass one edge of the canopy up and over the top of the frame. Make sure the frame is standing up and adjust some weight to one of the four corners before stretching the entire frame out.

Some canopies have several points which zip or snap together. The models of canopies might be diverse but you should have no trouble attaching it to the frame according to the guide that came with the package. Insert a bolt through each hole, then nut onto the end of each bolt and tighten.

The roof canopy is designed to fit snugly over the frame so that it is taught with no sagging. Occasionally, you might find it hard to push the slider upwards to lock the frame but there’s a way around it. Just peel the back canopy from the top of the legs; then once all the four struts are properly secured, pull the canopy corners back over the frame corners.

Once the upper part of the gazebo is locked into place, you can then pull down the canopy. Lift each leg and slowly pull out the inner leg until it pops into place. Repeat with each leg and adjust gazebo height by using the pull pin adjuster on the legs.

Insert a ground stake through the hole on the bottom of each post. Hammer the stake into the ground to anchor the steel gazebo.

Setting Up a Gazebo: Safety Considerations

When it comes to safety measures, certain things cannot be overemphasised as regards setting up a gazebo. For example, it’s absolutely critical to keep the location of the canopy as level as possible. You can even cover the area with mulch or crush stones so as to reduce tracking dirt or mud as well as other types of soil that might be slippery.

Going further, it’s always best to situate the area around the gazebo at least 5 feet from trees, electrical lines or any other thing that can be blown away by the wind. While some experts advise that a gazebo be taken down during a storm, it’s up to you to decide the best course of action to take.

Additionally, consider securing the gazebo with pegs and guy ropes if you plan on erecting it on a soft surface like a lawn or field. Not all gazebo plans will include anchoring but doing so adds extra protection against heavy winds gusts blowing the gazebo over; so it’s advisable to position additional weight to the bottom of each leg. Good examples of weights to use for extra stability are sandbags and steel stacking.

Finally, do not assemble the gazebo if any part (big or small) is missing as it could affect the entire structure of the gazebo. Also, do not leave the canopy attached to the frame, especially when you’re transporting it in a vehicle, as the shakings and vibrations can cause the frame parts and joints to rub violently with fabric which can lead to significant damage. Leaving the canopy might help you save time but the entire process of putting everything up takes just a couple of minutes.

How to Dismantle Your Gazebo

Since gazebos are meant for recreational purposes as well as ceremonies, it means they’re not permanent structures and shouldn’t be left standing for too long. For this reason, it’s important to know how to take down your gazebo quickly and this isn’t complicated as it’s the same process for erecting it but in reverse order.

First, lift the outer leg out of the ground and remove the height adjuster so you can slowly lower the frame. Do this again and again until the frame is back to its storage size.

Ensure that all pull pins are extracted from the leg holes before pushing the frame together. Only then can each leg be pushed towards the centre until the frame is back to its storage size. Once you’ve fully collapsed the frame, put in the storage bag against when next you want to set it up but make sure it’s completely dry before you do so. If it’s still wet, unload them and dry them out completely before putting them away. If you want to clean it, warm soapy water with a soft scrubbing brush should get the job done.

Setting up a gazebo is a straightforward process that takes just about 4-5 minutes if you study the material that came with the purchase and follow the guide above. For safety reasons, do not attempt to set up the gazebo all by yourself as you may get injured if it falls on you. If you feel you still need help with putting up a gazebo after reading this guide, consider getting in touch with professionals who will set it up in no time.

About the Author Jamie Irwin

Jamie is the Editor of the Windproof Gazebos. He's been known to assemble gazebos (for good friends) just for the kudos and has a tendency to hurt himself while testing them out in the garden. He loves long walks on the beach with his best friend Thor and learning how to cook (badly).

Should You Buy or Hire A Gazebo?

How to Secure a Gazebo from the Wind

4 Wooden Gazebo Kits That Are Well Made and Solid

Please log in again. The login page will open in a new tab. After logging in you can close it and return to this page.