Whether you're planning an event or need shelter for outdoor sports or other activities, a Gorilla Gazebo offers the shade and weather protection you need.

Constructed of heavy-duty materials but featuring a compact design and easy installation, a Gorilla Gazebo is perfect for use at home, at your business, or while on the go. 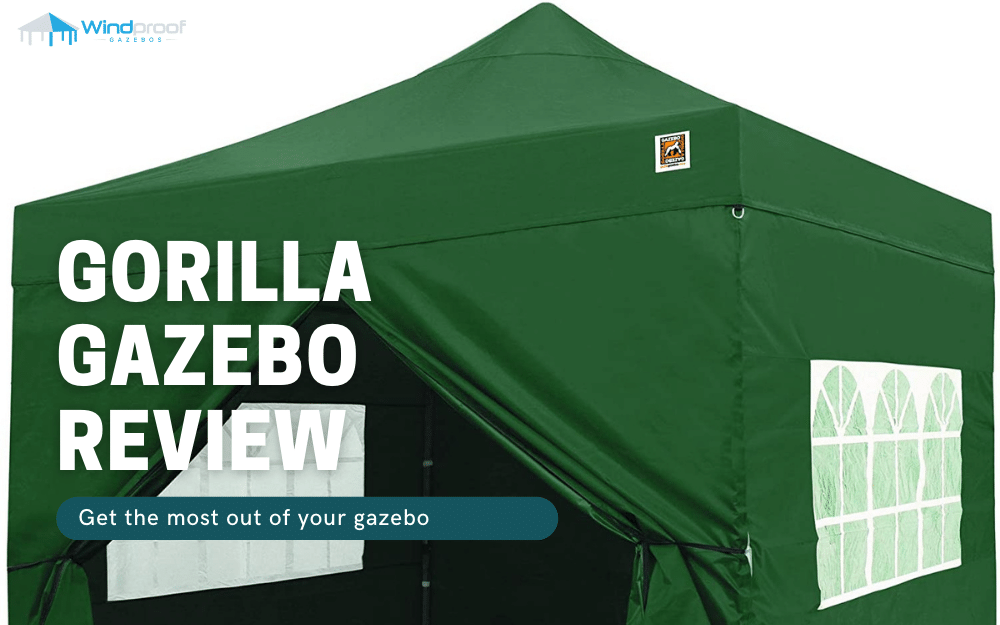 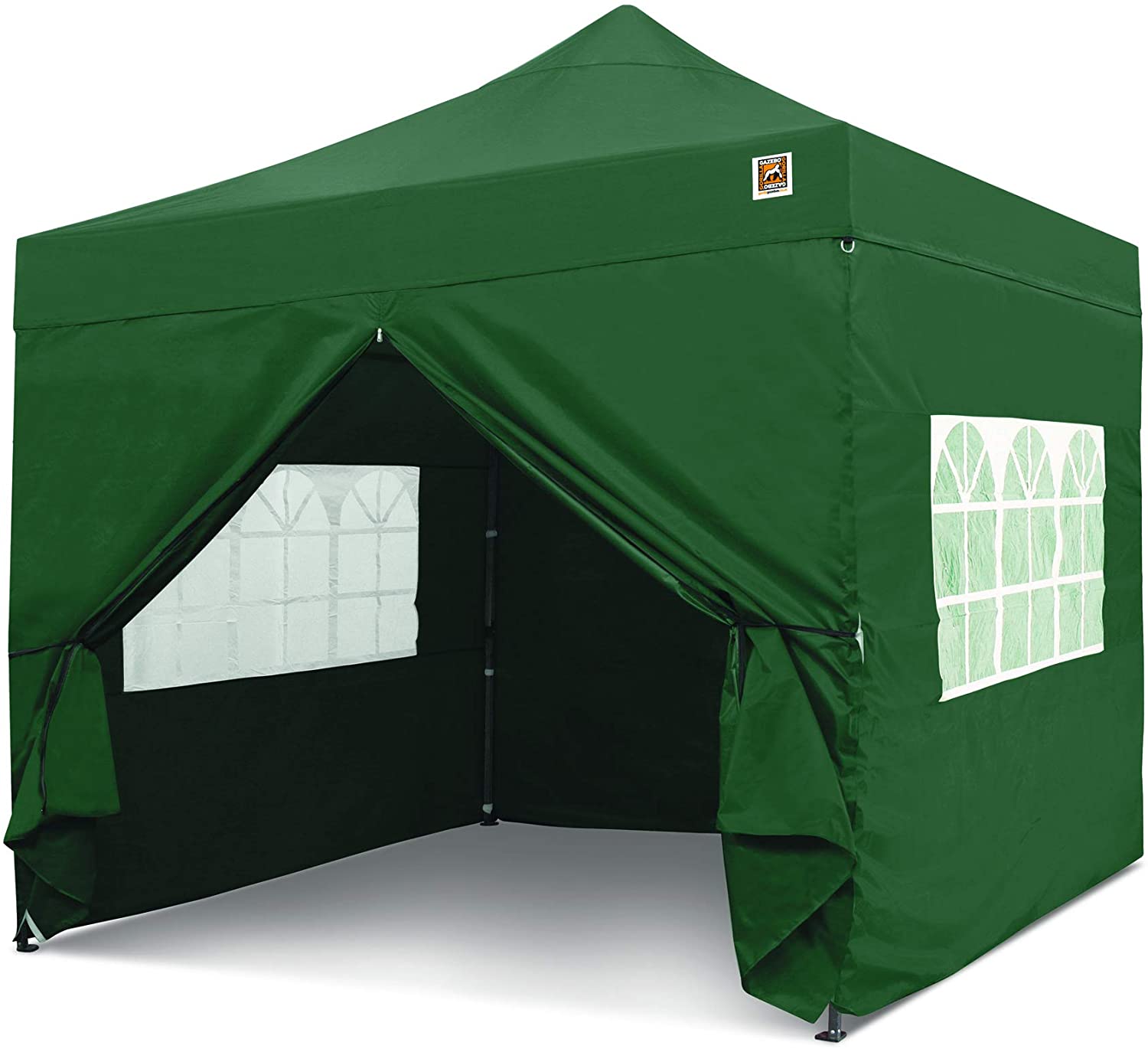 The Gorilla Gazebo is available in several color choices for increased versatility and is designed to last. Your gazebo comes with everything you need to get set up, including optional pieces for extra protection from wind, rain, and sun.

It weighs just 34 kg and includes a wheel storage bag that makes it easy to store and take from place to place. The Gorilla Gazebo is an ideal choice for outdoors activities ranging from weddings to birthday parties. Additionally, it can provide shelter for sporting events and even market stalls.

When you purchase a Gorilla Gazebo, you'll receive:

The gazebo will arrive in two boxes. The first will contain the steel frame, and the other will include everything else. Note: As the Gorilla Pop Up Gazebo features a collapsible design, there is no need for additional tools to set up the unit. You may need a mallet if you'll use the included pegs, but the gazebo itself requires no tools.

When shopping, you'll find that the Gorilla Gazebo is available in several color options, including:

Because the Gorilla Gazebo features a collapsible design with push-button adjustment, you don't have to worry about hunting down pieces and figuring out how they go together. The gazebo arrives fully assembled; you just have to open it up. Even the roof features a cross-truss design to eliminate the need for additional supports.

The Gorilla Gazebo's heavy-duty frame is made from high-tensile steel. It's super strong but also lightweight for easy transport. The company routinely showcases the gazebo's amazing strength by showing five grown men hanging from the frame — it doesn't sag in the least! The frame is also finished with an attractive and durable Hammerite paint that won't chip or scratch.

A unique feature of the Gorilla Gazebo is its cross-truss roof design. Super sturdy, it eliminates the need for extra support beams. This means you get to enjoy a strong gazebo, with no need for extra installation steps.

Another unique feature to be aware of is the Gorilla Gazebo's Clamp and Gutter system. If one gazebo isn't quite enough to fit your needs, you can attach multiple units to create one larger gazebo.

You can add additional units in any configuration you need to create the space that's perfect for your needs. This is the "clamp" portion. The "gutter" portion creates a waterproof channel to divert water from where the gazebos join. The Clamp and Gutter system is an optional feature that must be purchased separately, but it's compatible with all Gorilla Gazebo 3x3 models.

Included with the Gorilla Gazebo are four side panels to offer extra protection from weather. Two panels include church-style windows, while the other two include zippered doorways. You can tie the doorways open to allow easy access to the interior of the gazebo or close them off to create a more intimate atmosphere or offer extra protection from foul weather. The side walls attach easily with Velcro, so you can quickly provide additional shelter when the weather changes or as day turns into night.

The side panels and canopy (excluding the church-style windows) are made from 650D polyester that's been coated with PVC to provide water and UV protection. This extremely durable fabric is waterproof, making the gazebo a perfect choice for all types of weather — take it to the beach to have a place where you can escape the sun, or set it up at your market stall to protect your customers and merchandise from inclement weather.

While the windows are not made of the same material, they're still strong and won't leak. Unlike other gazebo options, the inclusion of these windows is a nice touch. They add a decorative touch, but they also allow light and make it easy to see who's inside.

When assembling the Gorilla Gazebo, you'll find push-button moldings throughout. These adjustments make it easy to put up and take down your gazebo, as well as quickly change its height. You'll also notice that these adjustments eliminate the possibility of pinching your fingers — anyone who's had a finger trapped knows this is a valuable feature.

Fully assembled at its highest setting, the gazebo has a walk-in head height of 6 feet, 11 inches. At its lowest setting, it measures 6 feet, 3 inches. Protip: If you want to keep wind from coming under the gazebo, assemble it to its lowest setting. The side walls will drape slightly, keeping air from entering from the bottom.

Included with the Gorilla Gazebo are eight pegs and guy ropes to secure your tent and prevent it from blowing over in windy weather. If you are setting up the gazebo over soft ground, simply pound the pegs into the dirt and attach the guy wires.

The pegs measure over 9 inches long for a sturdy hold, and they feature molded caps for easy attachment of the guy ropes. If you are set up in an area that doesn't have soft ground, you can still use the included guy ropes, but you'll need to attach them to the metal rings on the canopy instead.

When it's time to put the Gorilla Gazebo away, you'll find that it fits perfectly within its rolling storage bag. This is a huge benefit as the last thing you want to contend with is an unruly pile of material. You can even leave the canopy on the frame if you want, cutting down installation time even further the next time you set up the gazebo.

The complete package weighs just 34 kgs and measures about 5 feet long when disassembled, so you can conveniently stow it in the boot of your car for transport. If you need to take it a distance to get to your car or home, you'll find it easy to pull along thanks to the bags wheels and convenient carrying handles.

Setting up the Gorilla Gazebo is a two-person job, but it's easy to get it up in less than 15 minutes. You don't have to figure out which piece goes where; just take it out of its storage bag and pull it apart. It's collapsible design eliminates the need for tools and confusing instruction manuals.

The Gorilla Gazebo is mid-range in price, but it comes with lots of convenient features that you simply cannot find in cheaper options. For starters, it's much more durable than other gazebos that are made with thinner materials.

The inclusion of four side panels makes this gazebo an extremely versatile option, as does the ability to add additional units to a single, larger gazebo. You do have to pay extra for this Clamp and Gutter system if you want it, but it's a must-have if you plan to set up multiple gazebos.

Last, you cannot ignore the simplicity of installation — push-button adjustments and a one-piece design ensure your gazebo is ready to go in just minutes.

Who is the Gorilla Gazebo for?

The Gorilla Gazebo is an ideal choice for anyone who needs shelter while outdoors. It's easy installation process makes it a perfect option for both beginners and those who need a fast solution. You can use a Gorilla Gazebo during parties, sporting events, sales, and more.

Is the Gorilla Gazebo waterproof?

Yes, the Gorilla Gazebo is waterproof. Its frame is made from heavy-duty steel and finished with durable Hammerite paint to resist corrosion. The material of the canopy and sidewalls is PVC-coated polyester. This treatment makes the material waterproof, as well as also protects you from harmful UV rays.

How to install a Gorilla Gazebo?

It's easy to install a Gorilla Gazebo, and with two people, it takes only minutes. To install, remove the Gorilla Gazebo from its storage bag and set it upright. Standing opposite your partner, grasp two legs and pull apart.

How big is the Gorilla Gazebo?

How to Decorate a Gazebo for a Wedding Ceremony?