How to Put Together a Gazebo Frame

A gazebo is an attractive and affordable way to extend your living space into the outdoors. However, if you don't know how to put together a gazebo frame, you might worry that this is one outdoor project that is beyond your skill level.

Thankfully, gazebos are generally easy to build, especially if you purchase a ready-made kit and even more so if you opt for a collapsible frame.

Some kits are so easy to put together that you can have them assembled in as little as 15 minutes.

Even permanent structures don't take too long, meaning you can have your next gazebo up over the weekend. 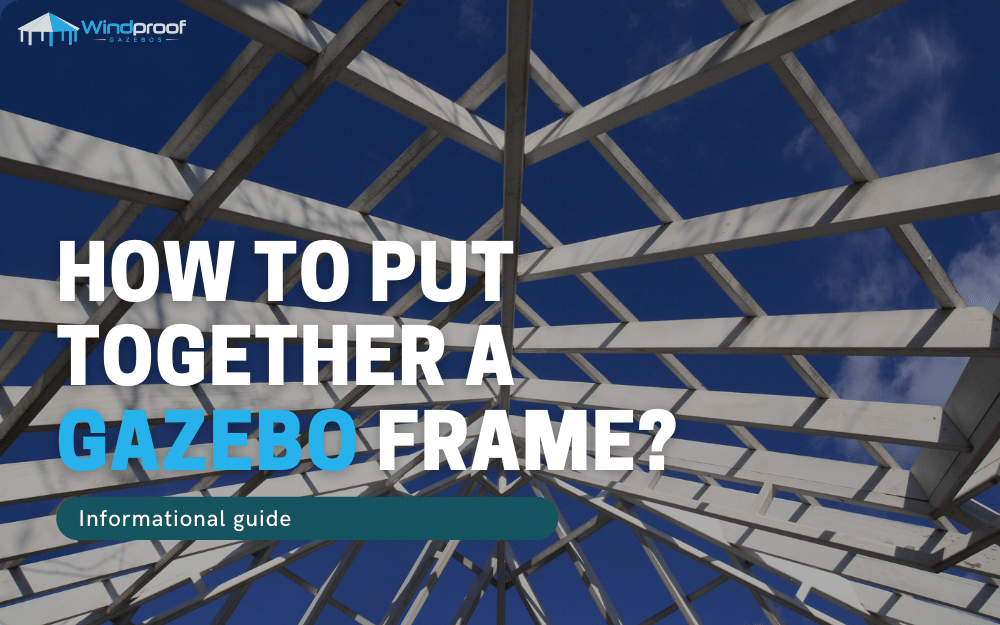 Putting Together a Gazebo Frame (Step-by-Step)

When learning how to put together a gazebo frame, the most important things to do are take your time and read the instructions. So long as you don't rush, you'll find that the process is straight-forward. However, if you're concerned how long it might take you to build one (or how hard it may be), you can always opt for a collapsible gazebo. There are many models available that designed to last for years.

Before starting, locate the instruction manual that's come with your gazebo. While most gazebos follow similar instructions for assembly, your particular unit may have specific steps that you need to follow.

While reviewing the instructions, take this time to also verify that your gazebo packaging includes everything that it's supposed to, including parts, screws, and other fasteners. If you're missing any parts, you'll want to reach out to the manufacturer for advice on what to do next.

This is also a good time to make sure that you have all the tools you'll need to build your gazebo. If you're assembling a ready-made kit, you may not need any tools. Otherwise, at the least, you'll probably need a hammer, screwdriver, wrench, and ladder.

Assuming the instructions are clear and you've confirmed that you have all parts and necessary tools, it's time to get to work.

If you're working on soft ground, carefully inspect the area. If you see small mounds or low-lying areas, you can use a shovel to move dirt around until the area is flat. If your garden needs significant levelling work, you'll save time and effort by hiring a professional to help you out.

The next step is to start construction of your gazebo.

If you have a collapsible gazebo, this step may be as simple as having two people grab either end and slowly stretching the frame to its full size. Your pop-up gazebo will likely have push-button adjustments or knobs to help lock pieces into place as they're opened.

If you're building a permanent structure, you'll assemble it per the instructions that came with your kit or plans. This involves assembling the posts and the roof, but not quite attaching them together just yet.

Once you've assembled the frame, it's time to add the canopy. It's better to do this step before attaching the legs so that you don't have to climb up a ladder to add the canopy. For most gazebos, you'll just pull the canopy over the roof and attach it using clips or Velcro.

If you're installing a permanent gazebo, you'll need to anchor it to the ground to prevent it from blowing or tipping over. Anchoring a gazebo will also help it retain its shape as it ages.

There are several ways to anchor a gazebo. If you are working on soft ground and not assembling a pop-up gazebo, you can dig holes, add posts, and cement them with wet concrete. If you're building your gazebo over concrete or on top of a deck, you'll use concrete anchors or deck brackets.

If you're assembling a temporary gazebo, you'll worry about anchoring after you've assembled your structure.

Attach the Legs and Roof

If you're assembling a pop-up gazebo, this is the point where you'll add the legs to your roof.

If you're building a permanent structure, your posts or legs should already be anchored, so you'll need to raise the roof and attach it to the posts.

In both instances, you'll need the help of at least one other person. Adding the legs to a pop-up gazebo can generally be completed by two people, but raising a roof to attach it to posts may involve at least four people.

Temporary gazebos require anchors just like permanent ones; the difference is that these anchors aren't going to stay for long.

Your ready-made gazebo kit may include pegs and guy rope to anchor your gazebo into soft ground. If it doesn't or you need to anchor to a different surface, you'll need to purchase the appropriate materials.

Congratulations! Your gazebo is up and looking fabulous. Are you done? Maybe. Depending on how you plan to use your gazebo, you may want to add some accessories. Aside from outdoor furniture, you might also consider privacy options, lighting, and temperature control.

If you'd like to have some privacy or further protection from bad weather, you can install curtains or side panels. Some gazebos come with these extras, but you'll most often need to purchase them separately.

Plan to use your gazebo after the sun goes down? You'll want to install some lighting to keep the space inviting. One of the most popular methods of lighting up a gazebo involves hanging string lights. With this method, you don't even need to call in an electrician; you can use an extension cord to run power to the gazebo.

If you'll be using your gazebo when it's especially warm or cold, you might be interested in investing in a fan or heater. Pedestal-style options take up little room, and again, you can power them by running an extension cord from the main house.

How To Build a Gazebo Frame Video

Our friend Paul Brady did a video which shows the steps required to build a gazebo frame. This will give you a good illustration of where to begin and guide you on how to achieve the desired outcome.

How Much Wind Can a Gazebo Withstand

How Much Wind Can a Gazebo Withstand